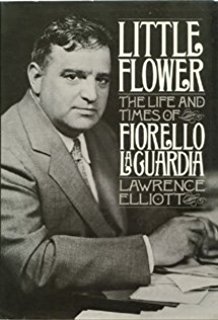 A story is told about Fiorello LaGuardia, who, when he was mayor of New York City during the worst days of the Great Depression and all of WWII, was called by adoring New Yorkers ‘the Little Flower’ because he was only five foot four and always wore a carnation in his lapel. He was a colorful character who used to ride the New York City fire trucks, raid speakeasies with the police department, take entire orphanages to baseball games, and whenever the New York newspapers were on strike, he would go on the radio and read the Sunday funnies to the kids.

One bitterly cold night in January of 1935, the mayor turned up at a night court that served the poorest ward of the city. LaGuardia dismissed the judge for the evening and took over the bench himself. Within a few minutes, a tattered old woman was brought before him, charged with stealing a loaf of bread. She told LaGuardia that her daughter’s husband had deserted her, her daughter was sick, and her two grandchildren were starving. But the shopkeeper, from whom the bread was stolen, refused to drop the charges. “It’s a real bad neighborhood, your Honor.” the man told the mayor. “She’s got to be punished to teach other people around here a lesson.” LaGuardia sighed. He turned to the woman and said “I’ve got to punish you. The law makes no exceptions–ten dollars or ten days in jail.”

But even as he pronounced sentence, the mayor was already reaching into his pocket. He extracted a bill and tossed it into his famous sombrero saying: “Here is the ten dollar fine which I now remit; and furthermore I am going to fine everyone in this courtroom fifty cents for living in a town where a person has to steal bread so that her grandchildren can eat. Mr. Baliff, collect the fines and give them to the defendant.” So the following day the New York City newspapers reported that $47.50 was turned over to a bewildered old lady who had stolen a loaf of bread to feed her starving grandchildren, fifty cents of that amount being contributed by the red-faced grocery store owner, while some seventy petty criminals, people with traffic violations, and New York City policemen, each of whom had just paid fifty cents for the privilege of doing so, gave the mayor a standing ovation.

Does this not remind us of Jesus? We are sinners, and satan and the law demand justice!

Yet God is love, and so He steps into the picture of our lives, in our worst moments, and confronts us in our foolishness and downright evil, and because of His holiness, judges us and declares us guilty of our crime. Yet then, because Jesus fully paid the price for our crime, He accepts His precious blood as payment, then provides for us when we fully do not deserve it.

This is good news! This is love! This is the Gospel!

If you do not know Jesus, please read :this: https://chrisaomministries.wordpress.com/2014/11/10/the-gospel-the-power-of-god/